Where is the Planetary Boundary for freshwater being exceeded because of livestock farming?

Where is the Planetary Boundary for freshwater being exceeded because of livestock farming? 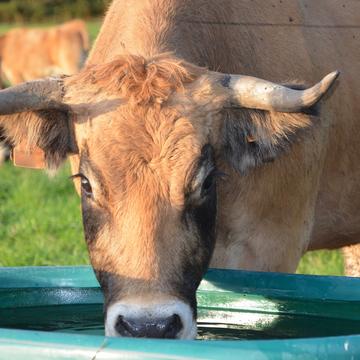 Livestock production has significant impacts on the environment, including due to the use of water. In this study, we provide a spatially explicit estimation of livestock blue water use, by analyzing feed crop water use and livestock drinking water. For the past four decades, livestock water use has increased from 145 km3/year in 1971 to 270 km3/year in 2012 with an increasing trend of 1.36%/year. The proportion of livestock drinking water use has remained relatively stable at around 10% of total water use attributable to livestock production. Several hotspots of water use, including eastern China, northern India, US high plains, are identified in terms of the long-term averages, while South America and Central Africa show the most rapidly increasing trends. In USA, climate change is found to contribute most to the changes in water use attributable to livestock, while feed cropping intensity and land use change are the dominant driver in China and India, respectively. Though, in total, livestock water use makes a relatively modest contribution to the Planetary Boundary (PB) that has been proposed for anthropogenic water use (4000 km3/year), we argue that this aggregate number is not particularly meaningful, so we identify places where livestock is a major contributor to the unsustainable use of water, in northern India, part of the Middle East, Northern China and Central US. 7% of rivers where excessive water withdrawals mean that there is insufficient residual flow to sustain the aquatic environment (which we take to be the local manifestation of a PB) have been tipped over that boundary because of livestock farming, whilst in a further 34% of rivers, livestock farming on its own exceeds the water PB. Our results provide new and more geographically specific evidence about the impact that the meat industry makes on the PB for water.