The role of meat in your diet 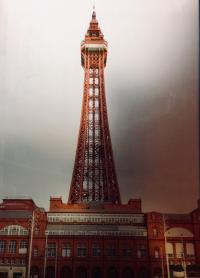 Can you guess where we are?

During March and April, the LEAP Diet and Behaviour Change team, together with the LEAP Public Engagement Coordinator, have been running a series of UK-wide focus groups to better understand people’s attitudes and beliefs about the role of meat in their diets.

Unlike other mass forms of research (e.g. surveys), the remit of the focus group is not to be representative but instead to engage small numbers of people (4-12) in an in-depth  discussion, purposely drawing on individual experiences, opinions and ideas to create a tapestry of personal responses.

The team decided to run focus groups targeted and two separate groups based on dietary identities: one session for those who identify as regular meat eaters (1+ times per day) and those who identify as meat-reducers (those who have reduced the amount of meat they eat in the past five years). In order to canvas a variety of views and to take into account the potential for regional variation we decided to run the groups in three locales: London, Blackpool and Oswestry. 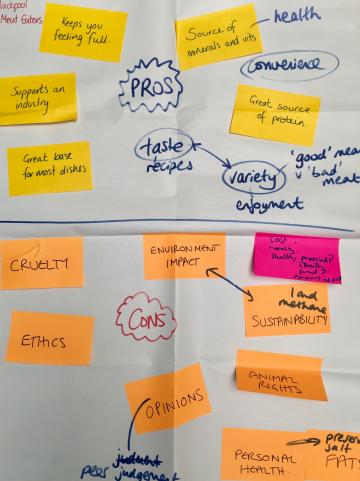 So why in those places? London is a large conurbation with a diverse population and a culture-defining food scene; Blackpool is a mid-size town in northern England which has the highest number of takeaways per capita in the UK (roughly one takeaway for every 500 people living in the town); and Oswestry is a market town in rural Shropshire, a county whose economy has been traditionally dominated by farming.

After running pilot sessions with colleagues and participants in Oxford, we are now around halfway through our series, and enjoying the scenic train journeys to our three desintations. There has been considerable interest in the two-hour sessions which we run in the early evening or at weekends, with most people signing up via Facebook. Interested participants are screened before signing up and are reimbursed for their time. For consistency, the focus groups are usually facilitated by the same person, with two other project staff in attendance for support and administration, and the entire session is audio recorded. Throughout the session, our goal is to ensure participants talk more to each other than to the facilitators, and that there is an opportunity for everyone to contribute.

Each focus group starts with an orientation activity so that participants can get to know one another and the facilitator can gauge group dynamics, followed by a ‘thought shower’ exercise around stimulus ideas such as what meat means to you, where you find information about food, and which of those sources are deemed most trustworthy. We then move on to an activity working in pairs which considers meat reduction – for those are regular meat eaters, this involves ranking the kinds of barriers to meat reduction they consider most difficult to overcome (e.g. social pressure, lack of protein, cost), whilst for meat reducers consider why they decided to change their diets, how they achieved this, and what challenges they face in maintaining it. After a well-deserved break, we move on to asking participants to come up with some messages or strategies that might convince people they know to eat less meat. Finally, we ask participants to get out of their chair and stand on ‘Line of Agreement’ to rate how persuasive they find certain messages (e.g. pertaining to health, animal welfare or the environment).

So far the focus groups have been a really worthwhile experience, with some revealing dialogues and topics. We hold the remainder of our sessions later this month and in May, and will be analysing and publishing the results shortly thereafter.