Most national dietary guidelines are not compatible with global environmental and health targets, and are in need of reform 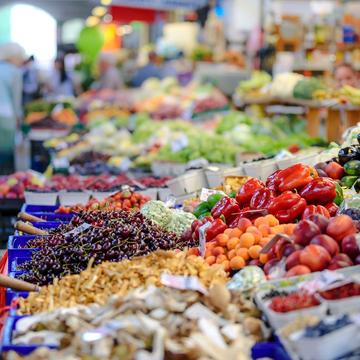 Read the study in The BMJ: The healthiness and sustainability of national and global food based dietary guidelines

Adopting more stringent guidelines in UK could reduce food-related greenhouse gas emissions by 70% and reduce diet-related deaths by more than 100,000 a year

Researchers have found that most dietary recommendations provided by national governments are not compatible with global environmental and health targets such as the Paris Climate Agreement and the Sustainable Development Goals. Recommending stricter limits on meat and dairy, and encouraging increased consumption of whole grains, fruits and vegetables, legumes, and nuts would be both healthier and lower in environmental impacts, their study found.

A team at the LEAP (Livestock, Environment and People) programme at the University of Oxford, and at Harvard, Tufts and Adelaide universities, looked at dietary recommendations from 85 countries. The paper, published today in The BMJ, is the first of its kind to analyse both the health and environmental outcomes of national dietary guidelines around the world.

The researchers modelled the adoption of guidelines at both the national and global level, and compared the impacts to global environmental and health targets that governments have agreed to and that are related to diets. These include for example the goal to reduce premature mortality from non-communicable diseases by a third, and the agreement to limit global warming to below 2 degrees Celsius.

The study also assessed the global dietary recommendations from the World Health Organization (WHO) and the more comprehensive and ambitious recommendations of the EAT-Lancet Commission on Healthy Diets from Sustainable Food Systems. It found that if populations followed the WHO recommendations it would likely result in health and environmental outcomes similar to those from following current national guidelines. However, adoption of the EAT-Lancet recommendations was associated with a third greater reduction in premature mortality, more than three times greater reductions in greenhouse gas emissions, and general attainment of the global health and environmental targets.

In the UK, for example, adoption of guidelines in line with EAT-Lancet recommendations could mean a reduction in greenhouse gas emissions from the food

system of 70%, and a reduction in diet-related deaths of 104,000, compared with only 17% and 78,000 if everyone were to adhere to the current national guidelines. The study also found that, if everybody around the world followed the UK’s current national dietary guidelines, then food-related emissions would exceed limits set for avoiding dangerous levels of climate change by more than threefold.

· Reforming national and WHO dietary guidelines in line with the current scientific understanding on healthy and sustainable diets, and providing concrete examples in terms of different dietary traditions and patterns, including plant-based ones which, when well composed, were found to be amongst the healthiest and most sustainable.

· Improving the environmental sustainability of dietary guidelines by providing more stringent recommendations on limiting the consumption of animal-source foods, in particular beef and dairy, in regions where they are consumed in large quantities.

· In most regions, improving the healthiness of dietary guidelines by providing clear advice on increasing the intake of whole grains, fruits, vegetables, nuts, and legumes, reducing the intake of red and processed meat, and highlighting the importance of maintaining a healthy weight.

· Addressing the currently poor adherence to dietary guidelines by investing in measures that would help populations improve their diets, such as health promotion programmes, aligning menus in school and work-place canteens, and regulating the food sector for its health and environmental impacts.

“Most national food based dietary guidelines shy away from providing clear recommendations on limiting the consumption of animal source foods, despite their exceptionally high emissions and resource use, and, in the case of red and processed meat, their clear association with diet-related diseases, such as heart disease and cancer,” said Dr Marco Springmann from the Nuffield Department of Population Health at the University of Oxford, who led the study.

He stressed that reforming dietary guidelines is an important starting point for encouraging the uptake of healthy and sustainable diets, but it also needs clear and consistent policy support to ensure that people actually follow them.

“The best dietary guidelines are meaningless if they are not backed up by targeted health promotion programmes and procurement standards, or if regulation is not aligned across departments and sectors. Making sure recommendations on healthy and sustainable eating are also reflected in a country’s agricultural policy and in the regulation of the food sector is an essential aspect for improving the healthiness of diets and the environmental impacts of the food system,” said Dr Springmann.