What do a collection of empty bottles, one inflatable pig costume and forty laminated photos of wheat have to do with each other? Well, these were the props used by our LEAP researchers to engage the public at our Oxford Science Festival event, Meat my Planet, on 12th October 2018.

With Storm Callum threatening, the stall was moved into the Weston Library but this didn’t dampen (sorry!) our visitors’ enthusiasm. Visitors to our stand had a chance to guess the land, carbon and water footprints for a typical UK sausage, and consider these impacts with LEAP researchers. They also compared these with the resources used by a loaf of bread.

One of the biggest discoveries for Kelly Reed, the project manager, was that people didn’t often consider the amount of crops that had to be grown to feed pigs. Mike Clark, a postdoctoral researcher in modelling food systems, explained this neatly to our visitors, ‘Pigs eat a lot of food and this food needs to be grown. Feeding a pig 2.7kg of food would result in the pig gaining only 1kg of weight, then only around 60% of the pig is edible.’ He also pointed out, ‘Pigs are often fed on soy, which is grown abroad and is one of the main causes of deforestation in the Amazon.’

But why were greenhouse gas emissions so much higher for sausages than bread? John Lynch, a postdoctoral researcher in Physics, was on hand to answer this, ‘Growing crops produces greenhouse gas emissions, so producing more crops for feed, as described above, means more emissions. Manufacturing fertilisers is energy intensive, so results in fossil fuel use and consequently emissions. Then when the farmer applies this fertiliser not all of it goes into the plants, some of it is lost to the atmosphere as ‘nitrous oxide’ – this is a really nasty greenhouse gas, 265 times stronger than carbon dioxide on a per kg emissions basis! Tractors used to grow and harvest the crops needs to use fuel, and then we have extra emissions after crop production as we need to move the crops to the animals, transport the animals to a slaughterhouse, and then refrigerate and move the meat. The pigs cause extra emissions themselves too – the strong greenhouse gases nitrous oxide and methane come from their manure.’

Guoyong Leng, a Senior Researcher in Hydrology, advised the public on the water impact of the humble sausage. ‘Crops are thirsty, and so having to grow more crops results in a larger water footprint. Although we often have a lot of rain in some parts of the UK, food production competes with the water humans need.’ He also added, ‘Large amounts of water are transferred between countries in the form of ‘embedded’ or ‘virtual’ water flows in agricultural products, and agriculture is the biggest user of freshwater globally.’

Our postdoctoral researchers in geography, including Alex Sexton, reported a range of fascinating conversations with the public and Nathan Clay was particularly moved by a Polish man’s memory of his mother selling her wedding ring to buy food during a time of shortages after the Second World War, a humbling reminder for those of us lucky enough to live in an age of relative plenty. 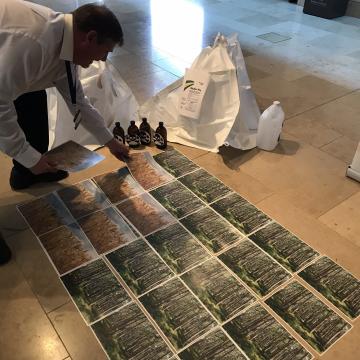 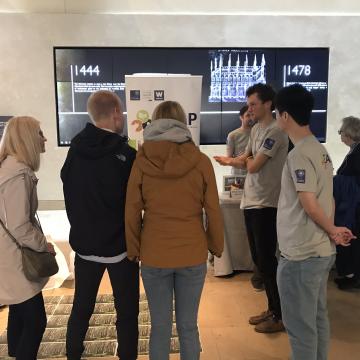 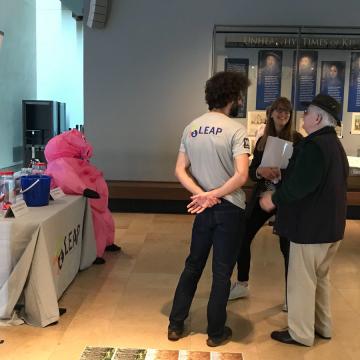