Nice to Meat you!

LEAP was invited to take part in Super Science Saturday on Saturday 10 March, 2018. Super Science Saturday is a free, twice-a-year, family-focussed day of live science engagement at the Oxford University Museum of Natural History. The theme for this event was ‘People and Planet’ where the public get a chance to meet scientists from the wider University who are working hard to find out what makes our planet work and how we can help to look after it, so on our stand entitled ‘Nice to Meat You’ we opted to focus on the environmental and social-domestic contexts of food choices and sustainability. 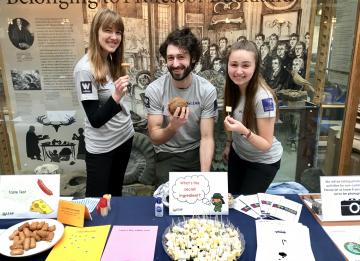 The event attracted 3,200 people and 250 adults and children came to visit the LEAP team. We offered three activities:

1) Food and Green House Gasses (GHGs): a sorting activity using small plastic toys (e.g. a hamburger, a tomato) and a visual scale to ask visitors to rank six foods in order of their relative greenhouse gas emissions (CO2e), with a reveal of the actual order at the end. We used three meat-based products (highest CO2e) and three vegetable-based products (lowest CO2e) to raise awareness of the role of livestock in global warming and to introduce the idea of sustainability within food systems.

2) Meat substitute taste test: we supplied tasting samples of cold cooked Quorn cocktail sausages and vegan cheese cubes. With the sausages we had two plates with different labels / descriptors and asked people to vote on which one they liked best. This was to test out whether labelling and language had any effect on people’s perception of taste (even though both products were the same). We also wanted to find out general levels of awareness and acceptance of vegan cheese and if they could guess the ‘secret’ ingredient (coconut!). We provided allergen and intolerance information.

3) Draw your favourite meal: An art activity, either asking children to draw their favourite meal on a paper plate and label it. They could either take this home or add this to a display of plates. This activity enabled us to get a sense of how much meat figures in children’s favourite foods and meals, and also provide a chance to talk to the adults whilst the children were occupied. 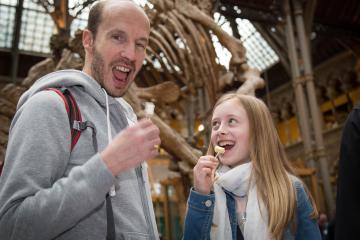 We found that labelling makes little difference to perceived taste, that people believed that meat subsitutes are actually healther than the meat its purporting to replace and that there is a strong desire by most to reduce the amount of meat they consume. Interestingly, many women who were the primary feeders, cooks and/or shoppers in the household reported some difficulty in persuading other family members (e.g. husbands and children) to accept dietary changes and even resorted to deception! Of the children’s favourite meals, 40% contained meat, 9% were fish-based and 51% were meat and fish free, of which around half contained diary (cheese/eggs). The word cloud above, where the size of the word denotes frequency, gives you an idea of the kind of meals kids chosse.

It was a great day - fun, busy and interactive - and provided the LEAP team with some useful insights with which to move forward with areas of research.