LEAP at the Natural History Museum 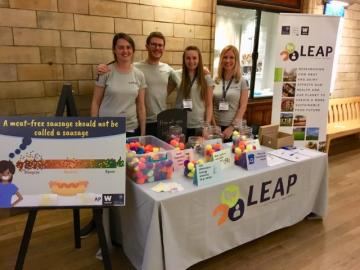 The LEAP team were delighted to be invited to take part in one of the monthly late night openings at the Natural History Museum (NHM) in London. The theme for the May event was ‘Feeding Time’, focusing on feeding strategies across the human and animal kingdoms, from a potted history of the domestication of livestock to the ingenious food collecting habits of moths and butterflies.

LEAP was in good company with other exhibitors keen to convey the impacts that our own food choices have on the planet and present alternative futures; headline talks on ‘rewilding’ Britain and some of the first lab meat burgers set to hit the shops in a few years were complemented by drop-in stands on sustainable fishing (Marine Conservation Society), the carbon footprint of everyday food choices (Food Foundation / SHEFS) and, of course, LEAP.

At our previous museum event, Super Science Saturday at the Museum of Natural History in Oxford, we had explored the greenhouse gas issues associated with meat consumption and taste-tested meat and dairy substitutes with our predominantly family audiences. This time, our basis remained the relationship between increasing food demands and the impact on the environment, but we decided to use the more adult tone of the event to take both a slightly more sophisticated and discursive approach to some of the topics within that theme. We saw the opportunity to facilitate engaged discussion with the public to tackle questions with no right or wrong answer. 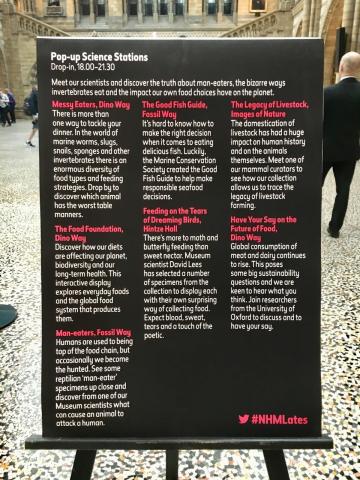 ‘Have Your Say on the Future of Food’, positioned in the busy ‘Dino Way’ corridor off the NHM’s famous Hintze Hall, comprised three activity stations - 1) a series of five boards asking visitors to use stickers to vote on how much they agreed or disagreed with specific statements on the naming of meat-free foods, meat and masculinity, the impact of veganism on the environment, the prospect of insects as livestock, and taxing meat; 2) a roundtable – which we shared with the SHEFS team – for short (5-10 minute) discussions of those statements with researchers; and 3) a multiple choice activity whereby visitors were asked to select one of six possible actions they could realistically do to help the environment, one of which was eating less meat.

We had a steady stream of visitors throughout the evening, with more than 300 taking part over 3.5 hours. Most of these were London inhabitants and many in the 20-40 age bracket. The format worked very well, with visitors able to choose the level of participation, from a quick ‘stick and run’ to more engaged and in-depth conversations with the team and amongst themselves if visiting as a couple or in a group and realising they held opposing views. Visual voting on the poster boards built up a rich picture of opinion and the statements stimulated interesting debates, for example, about whether a meat tax would negatively affect low-income families and what the revenue would be used for, where the data behind some of the statements came from, or about how the UK could learn from other cultures in accepting insects as a ‘natural and cheap’ food. Meanwhile on the ‘help the environment’ table, some nuanced conversations about barriers emerged, from a lack of skills to cook vegetarian dishes to the admitted ‘action gap’ in owning a reusable coffee cup and actually using it. 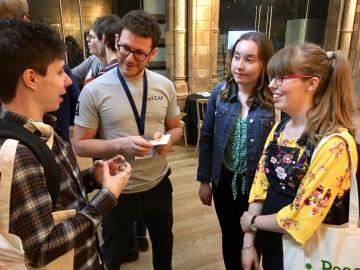 Overall, we feel the event met its aims in encouraging visitors to consider their own behaviours and value systems, one respondent reporting, “it really made me think about what I do and what I can change.” We also wanted to raise the profile of the LEAP project and the nature of its research, and we had a good response to the call for sign-ups to our newsletter and new public panel. With our new LEAP-branded roller banners, tablecloths, print materials and the seven team members in LEAP T-shirts, we aimed to be as visually memorable as possible to our visitors! They enjoyed the chance to talk one-to-one with researchers about real-life topics and by tackling ‘ideas’ rather than ‘facts’, we in turn felt more confident about expressing the complexities at hand, whether it be within the science or data per se, or in the ethical, moral and social implications of our food future.

Our thanks to David Urry and the NHM staff for having us.