LEAP at the Cheltenham Science Festival 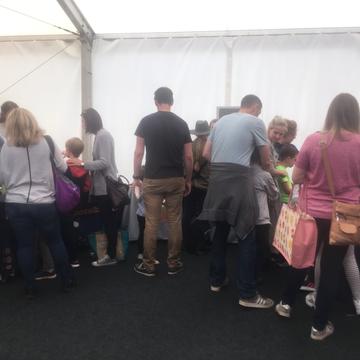 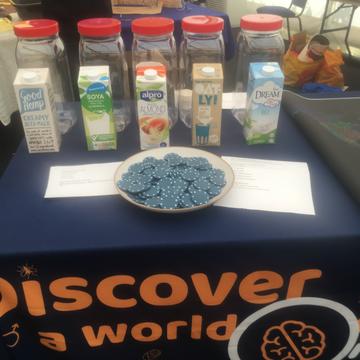 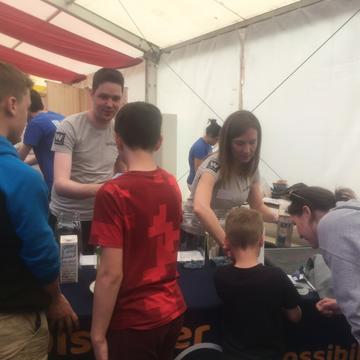 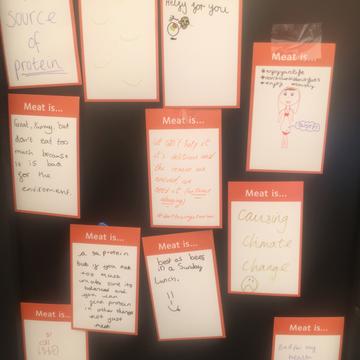 We knew it would be very much a family audience on the Sunday of the Cheltenham Science Festival so we armed ourselves with a cow skull, hoping to intrigue the kids and draw their parents in.

We’d also brought butchered bones from a Roman archaeological dig to start conversations around how long the history of humans has been entwined with livestock, a cow skin and some cuddly microbes (diabetes and a cancer cell) to draw out the work of our epidemiologists. The last item in our LEAP handling collection was a mock-up of the lab kit used to make cultured meat, which looked satisfyingly bloody and intriguing – Alex Sexton’s great suggestion.

LEAP Researchers, John Lynch and Christina Potter, were on hand to talk directly to the public along with our LEAP volunteers, Sophie, Daniela, Hannah and Martha.

No one could have quite prepared us for the keenness of visitors to the Cheltenham Science Festival with people three deep at our stands at some points during the day. I hadn’t expected to spend most of the afternoon acting as a milk sommelier but our plant-based milk tasting was by far and away our most popular activity and facilitated a range of conversations from environmental impact (thank you, Joseph Poore’s research - https://www.bbc.co.uk/news/science-environment-46654042) to the health impacts, especially in terms of calcium. It was fascinating to see how surprised some people were when they learnt that dairy products do have a significant impact on the environment, although we also spoke to a wide range of people who had already understood this and altered their diets in the light of this information.

A discussion about LEAP’s work with supermarkets around meat replacements was drawn out by offering tasters of quorn sausages. These provided a useful prompt for discussions.

We also asked the public to write or draw on comments cards to give us their thoughts stemming from the prompt ‘Meat is…’ This garnered a wide range of responses from ‘delicious’ to ‘murder’, showing the way in which the varying significances of eating meat are deeply woven into our culture and psyches. This was also a truly reassuring sign that we were talking to a wide spread of people.

Our researchers and volunteers reported an interesting range of conversations, which included curiosity as to how meat was actually grown in a lab to surprise about the impact of eating meat in terms of its greenhouse gas emissions. It was also useful for us to have a chance to discuss our research with the public and to learn about their concerns around the health aspects of transitioning to meat or milk replacements.

We’re looking forward to feeding the insights we gained at Cheltenham about the most positive ways to have these conversations into our public engagement kiosk in Oxford’s Westgate Shopping Centre. This runs from 24th – 30th June.

Cheltenham Science Festival 2019 aims to bring together some of the world's greatest scientists, thinkers and writers for a family-friendly showcase.