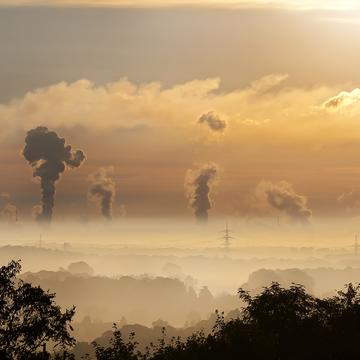 Different greenhouse gas emissions are often reported as 'carbon dioxide (CO2) equivalent' quantities. But the typical way of deriving these by using simple per-emission weighting factors (most commonly, the 100-year global warming potential) does not reliably indicate the climate effects of short-lived gases such as methane, as they cannot represent their non-cumulative impacts. In this paper, we suggest a different approach, a "CO2-warming equivalent," which is not based on a like-for-like per emission weighting, but reports CO2 emissions that would result in a similar temperature response to a given emission scenario. We show how an alternative application of global warming potentials, GWP*, can provide a simple means of estimating CO2-warming equivalent emissions by reporting a change in short-lived gas emission rates as a large emission or removal of CO2, and sustained emissions of short-lived gases as equivalent to emitting a relatively small amount of CO2. This new approach could provide a useful new means of relating emissions from livestock to their contribution to global warming, as a significant amount of methane is emitted from animal manures and particularly enteric fermentation.

Anthropogenic global warming at a given time is largely determined by the cumulative total emissions (or stock) of long-lived climate pollutants (LLCPs), predominantly carbon dioxide (CO2), and the emission rates (or flow) of short-lived climate pollutants (SLCPs) immediately prior to that time. Under the United Nations Framework Convention on Climate Change (UNFCCC), reporting of greenhouse gas emissions has been standardised in terms of CO2-equivalent (CO2-e) emissions using Global Warming Potentials (GWP) over 100-years, but the conventional usage of GWP does not adequately capture the different behaviours of LLCPs and SLCPs, or their impact on global mean surface temperature. An alternative usage of GWP, denoted GWP*, overcomes this problem by equating an increase in the emission rate of an SLCP with a one-off “pulse” emission of CO2.

We show that this approach, while an improvement on the conventional usage, slightly underestimates the impact of recent increases in SLCP emissions on current rates of warming because the climate does not respond instantaneously to radiative forcing. We resolve this with a modification of the GWP* definition, which incorporates a term for each of the short-timescale and long-timescale climate responses to changes in radiative forcing. The amended version allows “CO2-warming-equivalent” (CO2-we) emissions to be calculated directly from reported emissions. Thus SLCPs can be incorporated directly into carbon budgets consistent with long-term temperature goals, because every unit of CO2-we emitted generates approximately the same amount of warming, whether it is emitted as a SLCP or a LLCP. This is not the case for conventionally derived CO2-e.