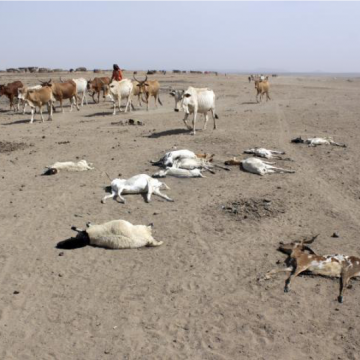 Globally, over 2 billion people are living primarily on a meat-based diet, which uses approximately 80% of the fresh water. Climate change/variability is a major driver of changes in livestock production through impacts on ecological condition, pasture growth and quality, livestock disease, and especially the availability of water resources.

Drought is an extreme weather phenomenon caused by below-normal water deficit, and has destructive impacts on meat and dietary productions at regional to global scales. Whilst previous studies provided valuable insights on drought impacts, they are mainly based on a deterministic approach without considering the full range of possible outcomes. Indeed, the incomplete information and understandings of process combined with the natural randomness of droughts make it hard to derive certain findings.

In this study, we provide a probabilistic estimation of global livestock production under droughts of various intensity. Specifically, we contribute to the literature by addressing the following scientific questions:

3) How future livestock production will be like under droughts? With global warming, droughts are projected to increase in frequency, duration and intensity worldwide in the future. Assessing the potential impacts of future droughts on livestock production is critical for adaptation and mitigation strategies.