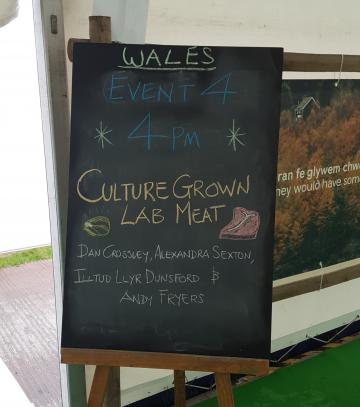 On a bright and busy first day of the 2018 Hay Festival I had the great pleasure of speaking on a panel about cultured meat and the opportunities and challenges this novel technology presents to the future of food and farming. The session was the third of four that day exploring a variety of topics relating to food and agriculture, from debates about the role of meat in human diets to a conversation with recently-appointed National Farmers’ Union (NFU) president Minette Batters about post-Brexit agriculture in the UK. Each session was greeted with a full house (or rather tent) and lively Q&A’s with the audience, many of whom had personal and longstanding connections with food production.

For our panel I was joined on stage by Dan Crossley, Director of the Food Ethics Council, and Dr Marianne Ellis (University of Bath) and Illtud Llyr Dunsford, two leading experts in cultured meat development, plus our host Andy Fryers, Sustainability Director at the Hay Festival. Cultured meat is often a topic that prompts wide-reaching questions and animated debate, and this session was no exception. Over the hour-long panel we covered themes including what cultured meat is, what are the projected environmental, social and political implications, and what does it actually taste like (very good, was the verdict from Illtud, the only panellist who has had opportunity to try some!)

The full session can be found on the Hay Player (although with a subscription) using this link: https://www.hayfestival.com/p-14166-dan-crossley-alexandra-sexton-illtud-llyr-dunsford-marianne-ellis-and-andy-fryers.aspx?skinid=16. To give a flavour of what was discussed, here are some of the key questions and points that stuck out for me.

What is cultured meat?

To kick things off, Andy started by asking the panel how cultured meat – or ‘clean meat’ as it is also known – is made. Marianne and Illtud set about explaining the technical processes involved, and where in the world it is currently being developed – mostly the US, but also in the Netherlands, Israel, Japan, and now in the UK with the recent launch of their own company. Put very simply, cultured meat involves techniques borrowed from tissue engineering to grow meat outside animal bodies. The process starts by taking an animal cell and placing it within what Marianne described as a type of “Lucozade mixture” with the addition of nutrient-rich serum, from which a product could be grown that is functionally and biochemically the same as conventionally-reared animal meat. At least that’s the theory: in practice most of the cultured meat prototypes that have been produced so far by the small handful of companies around the world have mostly, if not entirely, been made of muscle cells. Animal meat, however, is made up of many more components (e.g. fat) which will also need to be produced outside animal bodies to not only replicate the biochemical makeup but also importantly the taste and texture of meat. For a great synopsis of the processes involved in cultured meat production see the blog by Food Ethics Council member Ralph Early, and for an in-depth review of the technical aspects see the recent open-access paper by Stephens et al.

There are currently no cultured meat products available on the market, but a range of prototypes have been made over recent years including a beef burger, meatball and duck chorizo. An audience member asked about the projected cost of these products once on the market, and Marianne explained that it will depend on the efficiencies that have been made in the production process over recent years – the precise details of which are currently unknown as much of the R&D has occurred behind the closed doors of private companies. Another audience member asked about the expected environmental benefits of cultured meat compared with conventional livestock production. The panel conveyed that early studies suggest the impacts of cultured meat will be more favourable than some types of conventional livestock production, but with the caveat that more in-depth research is needed to verify these claims and that the full extent of impacts will likely not be known until production is fully scaled up. Waiting for the industry to get bigger before gaining more evidence of the benefits appeared to be an unsatisfactory conclusion for some of the audience however, with one member raising the valid concern that it would surely be “too late” by then.

What are the implications for society and the planet?

Despite the array of benefits often claimed by cultured meat proponents, the fact that production has not yet reached significant scale means its impacts – either positive or negative – are still largely unknown. While there is still uncertainty over the environmental benefits, the use of foetal bovine serum (a component of the blood of cow foetuses) also remains a key sticking point in terms of providing a more ethical alternative to conventional animal agriculture, although Marianne mentioned that the development of animal-free serum is currently underway.

A point that is often overlooked in discussions on cultured meat is the implications concerning power relations in the food system. Dan and I stressed the necessity of looking past the hype of cultured meat as a ‘disruptive’ technology to ask what, if anything, it is actually disrupting. Important questions remain over who will be empowered – and conversely disempowered – as this innovation develops. So far, technology start-ups and Silicon Valley billionaires have been the dominant driving force behind cultured meat’s development, and more recently Big Food giants such as Tyson Foods and Cargill have become key investors. Yet counter to this Big Food/Big Tech takeover of cultured meat, another vision discussed by the panel was the potential for it to become a new artisanal, grassroots movement akin to craft beer or cheese. It was also mentioned that some of the primary ingredients of cultured meat may still require conventional agriculture, and so a vision (particularly within the UK) is not for this technology to replace farming outright but instead potentially offer new economic opportunities for existing producers at multiple scales. Again, though, the feasibility of these alternative visions remains uncertain and wholly dependent on how the technology is scaled, and ultimately how ownership comes to be distributed within the sector. It also depends on how acceptable these different production scenarios will be to the general public, and indeed more generally how willing they will be to replace conventionally-grown meat for alternatives grown via cell culture.

If we can grow cultured meat, should we?

While perhaps not the pithiest of outcomes, an overarching conclusion of the panel was that we need to continue asking questions of cultured meat and remain cautious of the hype that has presented this approach as a silver-bullet fix to food system problems. This is not to say that technologies such as cultured meat should not be explored, but that we must remain vigilant to the shininess of technofixes distracting attention and investment away from solutions that could be more effective in delivering sustainable and socially-just food systems, and which in some cases may already be available. So far, cultured meat has provided a juicy topic to chew over and reflect on what we, as different publics, want the future of food and farming to look like. Taking stock in this way and engaging as many people in these discussions is critical whilst the technology is still relatively nascent – there is clearly much at stake in how our future steaks will be produced.

Alexandra Sexton is a geographer and postdoctoral researcher on the LEAP project. Her research examines the politics of food technology and food security, with a particular focus on alternative approaches to conventional livestock production. For further reflections on the Hay Festival panel, check out Dan Crossley’s blog on the Food Ethics Council website.