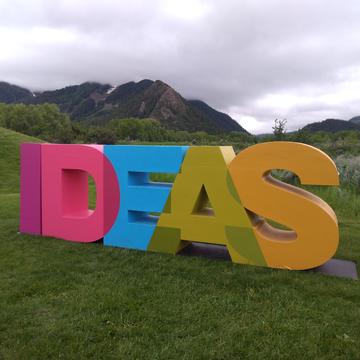 Hidden in Colorado’s Rocky Mountains on a Bauhaus style campus, the Aspen Institute, an international non-profit think tank, hosts its annual Aspen Ideas festival. This year, nutritional epidemiologist Dr Anika Knuppel from the Wellcome Trust funded Livestock, Environment and People (LEAP) was given the opportunity to join the festival as a Scholar on Health. The Aspen Ideas Festival Scholars are a group of so-called global leaders and are offered not only to attend the festival but are furthermore connected in scholars-only networking sessions and receptions.

The festival covered talks on a broad range of topics reaching from health inequalities, mental health, new methods and perspectives in research, to how to address gender inequality and harassment in young people, health care and research. Modi Mwatsama and Howard Frumkin from the Wellcome Trust presented the ‘Planetary Health’ diet to a group of attendees at a round table for a lunchtime discussion. During this talk, Anika noted “It was interesting to hear the different perspectives on the topic, while a GP is concerned with how to support their patients in changing their diets, others noted how there are different players in the field and how price and convenience are still important drivers of food choices”. Furthermore, fellow scholar Lillian Mutengu, highlighted international differences in this quest and emphasized how in the African region food intake is shifting from traditional diets that are largely in line with the recommendations towards diets higher in meat and sugar. A shift supported by ad campaigns.

In Anika Knuppel’s words, her take away message from the event for her own research was the importance of the international perspective. She observed “Many of the scholars I met and spoke with were from the United States, where the unique health care situation makes prevention of health issues so much more of a pressing issue”. Also, she noted after meeting researchers and advocates from developing countries, “this highlights the need for my current, mostly UK centred research to be replicated in other places worldwide”.

Overall, Anika found that attending the festival and connecting with health advocates and researchers from different disciplines was an inspiring experience. She noted “This was something I had never done before and I am still moved by this experience. The Aspen Ideas Festival is a great combination of science and inspirational talks. After a talk about #metoo I was in tears, I had not heard that many powerful speeches at once before. Other talks, those regarding health inequalities and mental health reminded me of my education in social epidemiology during my PhD and how important it is to remember that issues of diet and health do not exist in a bubble, but are part of bigger, often social issues. Furthermore, I met people with unique paths, jobs and experiences, many of whom I hope and believe I will cross paths with again.”

The Aspen Institute is an educational and policy studies organization based in Washington, DC. Its mission is to foster leadership based on enduring values and to provide a nonpartisan venue for dealing with critical issues. The Institute has campuses in Aspen, Colorado, and on the Wye River on Maryland’s Eastern Shore. It also maintains offices in New York City and has an international network of partners.